“Not all wounds are visible.” ~unknown “Post-traumatic stress can occur acutely (soon after the trauma), or in a delayed onset months after.”

Length of time varies. One must have symptoms for at least one month following an event to receive a PTSD diagnosis. In some cases, particularly where it is not treated, PTSD can last a very long time, perhaps the remainder of one’s life.

Post Traumatic Stress Disorder (PTSD) is an anxiety disorder that can develop after experiencing or witnessing a traumatic event, or learning that a traumatic event has happened to a loved one.

For people with PTSD, it is very common for their memories to be triggered by sights, sounds, smells or even feelings that they experience. These triggers can bring back memories of the trauma and cause intense emotional and physical reactions, such as raised heart rate, sweating and muscle tension.

Anyone can get PTSD at any age. This includes war veterans and survivors of physical and sexual assault, abuse, accidents, disasters and many other traumatic events. Not everyone with PTSD has been through a dangerous event. Some people get PTSD after a friend or family member experiences danger or harm.

All Veterans with PTSD have lived through a traumatic event that caused them to fear for their lives, see horrible things, and feel helpless. Strong emotions caused by the event create changes in the brain that may result in PTSD. … Yet only some will develop PTSD; the reason for this is not clear.

Post-traumatic stress disorder (PTSD) can develop after a very stressful, frightening or distressing event, or after a prolonged traumatic experience. Types of events that can lead to PTSD include: serious road accidents. violent personal assaults, such as sexual assault, mugging or robbery.  Sept. 6, 2015

PTSD can have severe effects on the hippocampus, causing problems with transferring short-term to long-term memory. There is no one way that patients’ memories are affected by PTSD, as shown by a variety of studies.

As with most mental illnesses, no cure exists for PTSD, but the symptoms can be effectively managed to restore the affected individual to normal functioning. The best hope for treating PTSD is a combination of medication and therapy.

The symptoms of PTSD can be hard on your body so it’s important to take care of yourself and develop some healthy lifestyle habits. Take time to relax. Relaxation techniques such as meditation, deep breathing, massage, or yoga can activate the body’s relaxation response and ease symptoms of PTSD.

PTSD is diagnosed after a person experiences symptoms for at least one month following a traumatic event. However symptoms may not appear until several months or even years later. The disorder is characterized by three main types of symptoms: 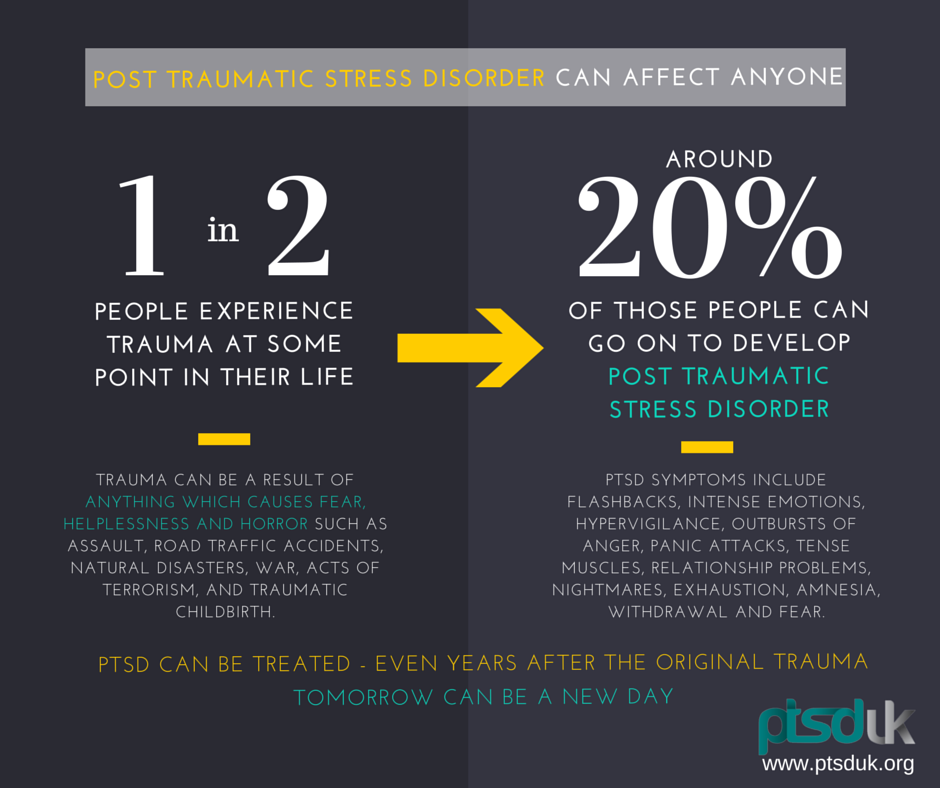 Diagnosis criteria that apply to adults, adolescents, and children older than six include those below. Read more details here.

The presence of one or more of the following:

Two or more of the following:

Two or more of the following marked changes in arousal and reactivity:

Also, clinically significant distress or impairment in social, occupational, or other important areas of functioning not attributed to the direct physiological effects of medication, drugs, or alcohol or another medical condition, such as traumatic brain injury.

Depression is common in men and women with post-traumatic stress disorder(PTSD). The trauma that caused PTSD also may cause depression. If you have either of these mental health problems, it is possible you have the other. You may need to treat both of them.

Severe emotional trauma causes lasting changes in the ventromedial prefrontal cortex region of the brain that is responsible for regulating emotional responses triggered by the amygdala. Specifically, this region regulates negative emotions like fear that occur when confronted with specific stimuli.Jan 24, 2015

Complex -PTSD is a condition that results from chronic or long-term exposure to emotional trauma over which a victim has little or no control and from which there is little or no hope of escape, such as in cases of: domestic emotional, physical or sexual abuse.

Early childhood trauma generally refers to the traumatic experiences that occur to children aged 0-6. These traumas can be the result of intentional violence—such as child physical or sexual abuse, or domestic violence—or the result of natural disaster, accidents, or war.

Psychological trauma is a type of damage to the mind that occurs as a result of a severely distressing event. Trauma is often the result of an overwhelming amount of stress that exceeds one’s ability to cope, or integrate the emotions involved with that experience.

Additional information about PTSD can be found on NIMH’s post-traumatic stress disorder page.

Possible causes for PTSD include experiencing or witnessing:

Symptoms of PTSD include: 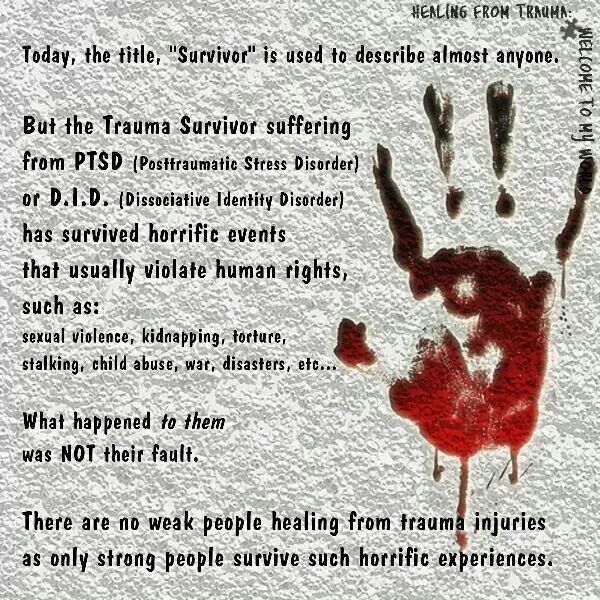 The onset of symptoms usually occurs within three months of the incident, but may not occur for several years.

PTSD can affect people of any age, including children.

About 7.5 percent of Americans will experience PTSD in their lifetime.

About 5 million Americans will suffer from PTSD during any year.

Women are twice as likely to experience PTSD as men.

People with PTSD oftentimes also suffer from depression or other mental disorders.

Anyone with PTSD is at a high risk for suicide.

PTSD is highly treatable with a combination of drug therapy and psychotherapy.

There are four main types of PTSD that may be experienced by an individual who has lived through a traumatic event:

1. Re-Experiencing Symptoms
Also known as reliving the event, individuals will be tormented by horrible memories and nightmares of the event. This can force the mind to believe that it is reliving the event over and over. Many medical professionals also refer to this event as a flashback.

2. Avoidance
Many individuals who are burdened by PTSD have the tendency to avoid situations that may trigger any memories that remind them of the traumatic event. This can also lead to avoiding any thought processes that pertain to the situation.

3. Negative Personality Changes
Personality changes are another prevalent issue associated with PTSD. Sufferers will commonly have a skewed perception of how they think of themselves and how others think of them. These emotions could include shame, guilt, or fear. This can also lead individuals to be less interested in activities that they otherwise would have enjoyed prior to the event.

4. Hyperarousal
Hyperarousal is incredibly common for people with PTSD as it is the factor that brings forth the jittery sensations and constant state of being uneasy. This is a result of constantly being on the lookout for dangerous situations.

1. In 2012 over 5000 suicides in the United States alone occurred as a result of combat-based PTSD.
2. PTSD related suicide is the 10th leading cause of death in the United States.
3. 7.5% of people in the world experience PTSD during their lifetime.
4. 5 million Americans suffer from PTSD on an annual basis.
5. Women are 2 times more likely (10%) to acquire PTSD than men (5%).
6. The majority of individuals with PTSD also suffer from further mental disorders such as depression.
7. Police officers, firefighters, war veterans, and EMT workers are more vulnerable to PTSD than traditional citizens.
8. Anyone who is suffering from PTSD is at an incredibly high risk for suicide.
9. 22% of people who had suffered PTSD from rape attempted suicide at one point in their lifetime.
10. 23% of individuals with PTSD from a physical assault event also attempted suicide at one point in their lives.
11. 24% of individuals who were confronted with sexual assault as a child attempted suicide throughout their lifetime.
12. The severity of PTSD depends on the severity of the situation and the duration of the event.
13. Aside from self-harm, sufferers from PTSD will be prone to other dangerous behavior such as violence, hatred, and estrangement.
14. 60% of women in the world experience a trauma at one point in their lives.
15. 50% of men experience a trauma at one point in their lives.
16. 11% to 20% of veterans from the Afghanistan and Iraq wars suffer from PTSD.
17. 10% of the Gulf War vets suffer from PTSD.
18. 30% of veterans from Vietnam suffer from PTSD.
19. 55% of women in the military developed a form of PTSD from sexual harassment and assault.
20. 38% of men in the military developed a form of PTSD from sexual harassment and assault.
21. 36.6% of PTSD victims are classified as severe cases (at-risk for suicide).
22. The majority of individuals suffering from PTSD are between the ages of 45 and 59, followed by 30 years of age and 44 years old.
23. 49.9% of people suffering from PTSD are currently in the process of receiving treatment via a licensed healthcare professional.
24. $42.3 billion is allocated to the prevention and assistance associated with PTSD treatment.
25. Individuals with PTSD have the highest rate of using healthcare services due to the fact that there are wide arrays of symptoms experienced from this disorder.
26. 60% to 80% of individuals who are victims of a severe traumatic event will develop PTSD.
27. 50% of outpatient mental health professionals have PTSD.
28. There have been higher rates of PTSD seen in African Americans, Native Americans, and Hispanics.
29. 1 in 5 veterans returning from combat will have PTSD.
30. 13% to 43% of boys and girls will experience a traumatic event during their childhood.
31. 30% to 60% of children who survive a specific disaster suffer from PTSD.
32. 33% of youth that are exposed to community violence develop PTSD.
33. 90% of sexually abused children develop PTSD.
34. 77% of children exposed to a school shooting develop PTSD.
35. Over 65% of children exposed to a traumatic event will attempt to take their own life at one point during their lifetime.